Placerita Canyon State Park is a historical landmark, protected to preserve the location of the discovery of gold in California in 1842. Based on park descriptions and photographs and the testimony of my brother, there is a lot of great hiking in Placerita Canyon. In fact, if you just Google “Placerita Canyon,” you’ll see a lot of beautiful photos I wish I had taken for you.

I personally cannot speak to the hiking experience. I have “hiked” Placerita Canyon twice. On both occasions, it was a quick trip with my brother Phil, who had a toddler strapped to his back, which really limits how long and how strenuous one wants a hike to be. (The toddler, for the record, was his own.)

For our first mini-hike, we went up a hillside, took some pictures, then walked back down, Phil eyeballing the trailheads, trying to remember which one was the trail he’d meant to lead us down. He and his wife had hiked this amazing trail once. It was really cool. He was pretty sure it was that one. Or no. Damnit. Wait, yes. That one. But was this even where they parked?

Our second mini-hike was actually on the Ecology Trail. It’s a gentle little journey behind the Placerita Canyon Nature Center. This time, Phil put his 2-year-old son in charge of locating all the birds. W rode in the carrier on Phil’s back, watching, his eyes scanning the trees.

“I hear birds,” W confirmed, still watching. Watching everything. The trees, the dirt, the rocks, skittering lizards, me. He narrated the trail as we walked. “We go uphill. We go downhill. We walking.”

At every fork, Phil asked W which path we should take. “Should we go that way?” he’d ask, pointing. “Or that way?” W would take a good, long look both directions, drawing in his lower lip the way he does when he’s taking a decision very seriously. Then he’d point, and Phil would oblige.

“That’s the fun thing about hiking,” Phil told his son. “You get to decide where you want to go.”

Phil and his wife are passionate about parks. They hike, they camp, they fish, and they’ve nurtured W’s natural interest in the outdoors. Every time I join Phil and W on a trip to the park, I can see Phil deliberately teaching his son that his environment is not just for looks; it’s an entity to engage in. To W, it seems, the natural world is something he is a part of. He fears nothing in it. He knows that bees sting and snakes bite and you don’t go into the water by yourself. But these are truths and policies; not warnings against showing up at all.

Near the end of our nature hike, we came to another fork. One trail led uphill, one led downhill. Phil, now worn from carrying the weight of a human being on his back, asked warily, “Which way, W?” My nephew looked right. Looked left. Looked right. Pointed left. Uphill.

Phil grumbled under his breath, but he took the path uphill, anyway. 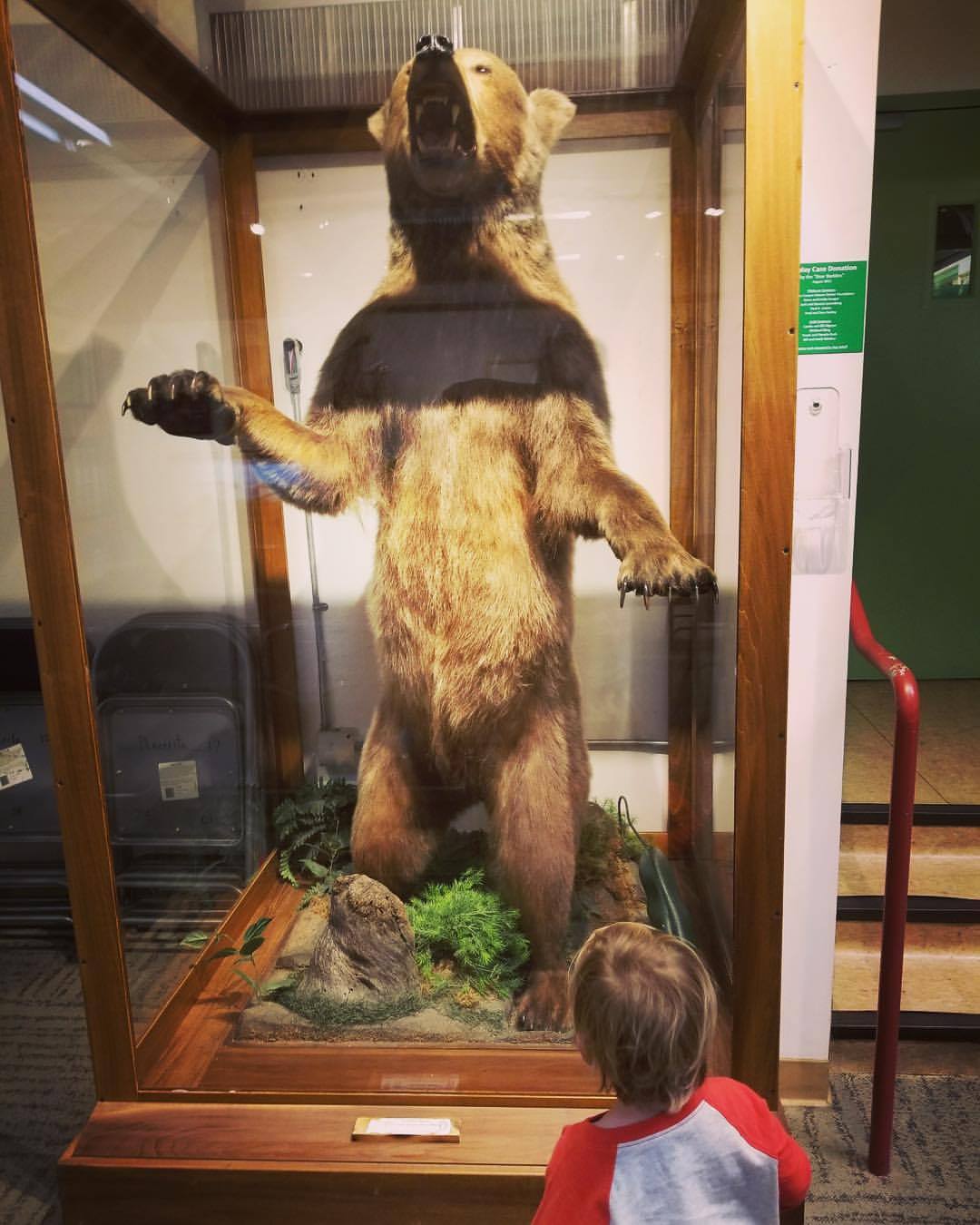 Afterwards, we went to the Placerita Canyon Nature Center, which we always do, so W could visit the rescued hawk and turkey vulture, so he could look at the extensive display of taxidermy animals inside, so he could hold his vulnerable little face inches from the rattlesnake terrarium and laugh in delight when the snake moved closer to the glass to stare back. A nature guide explained to W that the tortoises were hibernating, which means they’re sleeping because they don’t like the cold. W stared at him, looking dazed, the way toddlers do when strangers try to engage them. But he heard the guide, and he remembered. I know this because five minutes later, W explained hibernation to me.

He touched every tree along the walk back to Phil’s car, smiling up at the branches, his tiny palm against the rugged enormity of something older than all of us.

A few days later, the internet lit up with head-shaking Americans talking about the national school walkout for gun reform like it was more shameful than Senior Skip Day. These kids grew up learning to revere American rebellion, to embrace democracy and their moral responsibility to contribute to shape of their nation. Here they were, doing exactly those things as a loud fraction of their nation hissed that this protest was unAmerican.

I thought of Phil standing at that last fork in the trail, a child strapped to his back . . . a child who is meant to grow up and see himself as a participant in the world he lives in, as someone who can involve himself in the passage forward, not just ride along on a journey planned by someone else. I thought of W’s pensive face surveying each path, his certain little finger pointing where his father did not want to go. I thought of Phil’s grudging forward steps at the foot of that hill, accepting a choice he would not have made himself, not even able to witness W’s smiling face turned up towards the shivering branches of a world that belonged to him as much as anyone else.

To participate in something is to love it. To value it. To prioritize it.

Let no one tell you otherwise.

The Placerita Canyon Nature Center is a great resource for families. In addition to a mini-museum of native plants and animals, the nature center features live animals and educational programs for children and families. You can also check out their website for upcoming events, including regularly scheduled twilight hikes, bird walks, and wildflower walks. 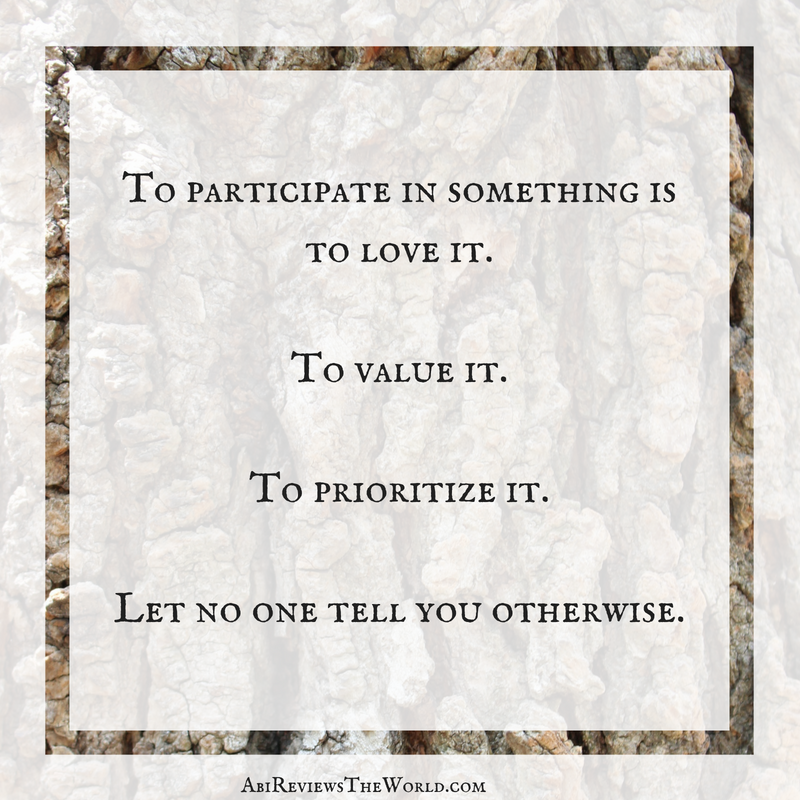