Angels Flight Railway is the world’s shortest railway at just under 300 feet long. But I’m not sure why I opened with that detail, because the the history is what really draws a person in. That and the Angels Flight cameo in La La Land.

Angels Flight first opened in 1901 as a way for commuters to travel between the the fancypants neighborhood of Bunker Hill and downtown Los Angeles. For a penny each way, Angelinos travelled the steep hillside in one of Angels Flight’s twin cars, Olivet and Sinai. The railway was in use until 1969, when the old Bunker Hill neighborhood turned into a bunch of skyscrapers. Olivet and Sinai then hung out in a warehouse for almost thirty years until the railway was resurrected once again in 1996–this time half a block south from the original location. 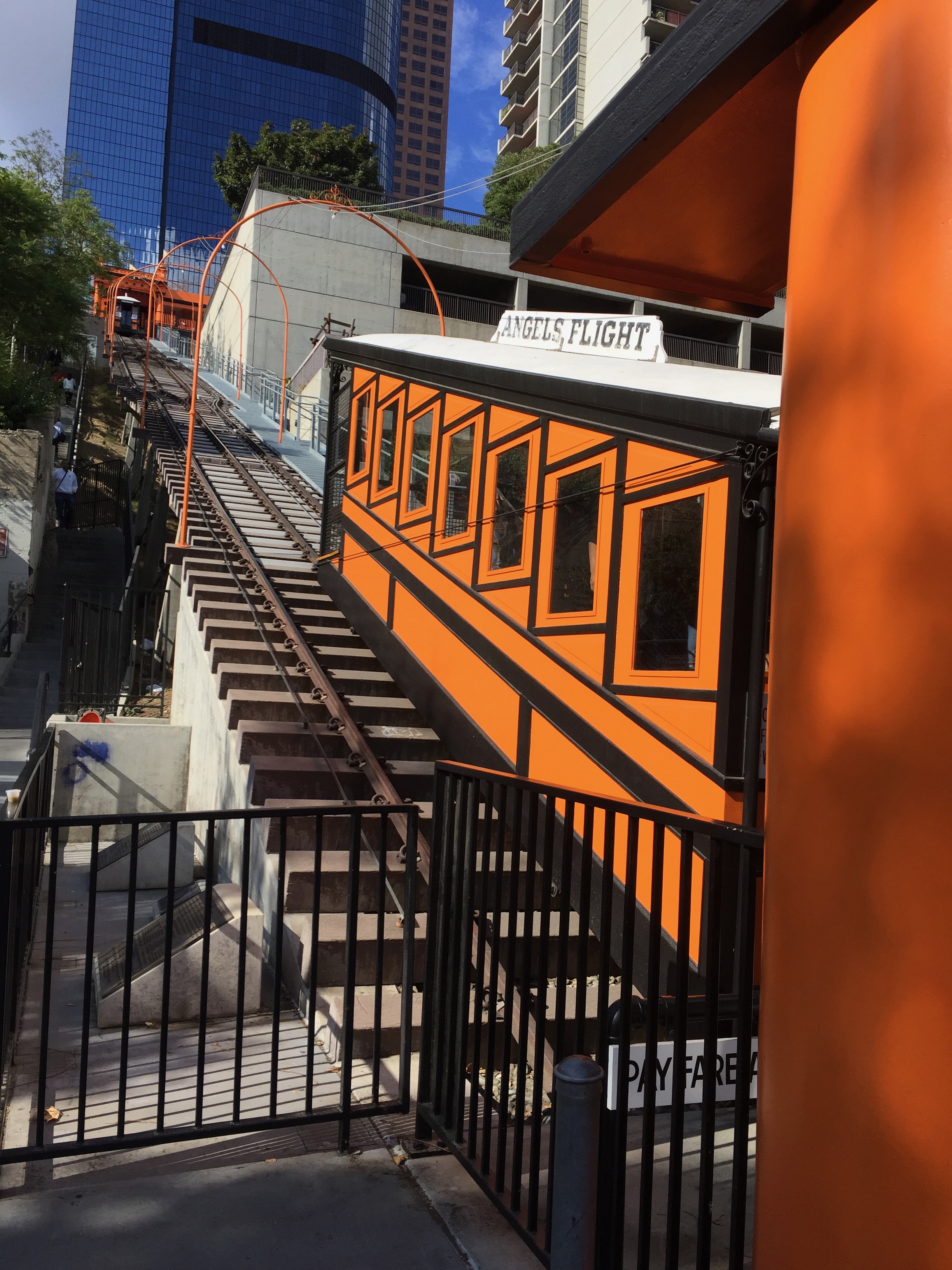 I first learned about Angels Flight in a Los Angeles guidebook I bought at a used bookstore. I was still very new to L.A. at the time, still struggling to find some sense of “home” here. It takes a while to get to know Los Angeles. It’s a very large city that is many, many things, and you can turn a lot of corners and find things that are not you. I flipped through the guidebook and saw plenty of things I did not care about. The Walk of Fame. Rodeo Drive. Star Tours. But a bright-orange, hillside railway constructed while Queen Victoria was still alive? Yeah. That’s my deal.

Unfortunately, I only learned about Angels Flight because I was reading a 1998 guidebook in 2007. See, what the 1998 guidebook didn’t know is that Angels Flight would shut down again in 2001 after Sinai broke loose at the top of the hill, crashed into Olivet, and a passenger was killed. I missed my window. Or dodged a bullet. A little of both.

The railway opened again in 2011, but by then, Angels Flight was off my radar. I’d given up on it and discovered all the other parts of the city that could belong to me. The Getty, The Autry, Malibu Creek State Park, The Iliad Bookshop, Point Dume. I didn’t even realize Angels Flight was up and running again until I heard the news that it had closed. Again. A derailment this time.

So then here’s me in 2017, hearing that Angels Flight has been restored once more, and I’m thinking I’d better get on that tram before another tragedy shuts it down and I lose my chance. Which is a weird reaction for someone who truly cannot handle or trust the rickety tick-tick-tick of a modern roller-coaster, let alone a 117-year-old railcar.

I went with my friend Carol, and when we boarded the trolley, I immediately felt . . . well, transported. It’s a cliche, but it’s honest. Angels Flight truly is a preservation of the past (with updated safety precautions). The aisle of the car is, essentially, a staircase, with two-person benches at either side to accommodate for an upright ride. Carol and I sat ourselves at the very top, where — I thought to myself — we would have the farthest to fall if the cables snapped.

You make a lot of these calculations on the ascent. Or, you do if you’re me. The car sways and metal scrapes. It’s hard not to think of all the weight the cable is asked to hold, the stakes rising with every second, as the car lifts you farther and farther from the street below. I do trust that Angels Flight has been thoroughly inspected for safety, as promised. But slow, creaking ascents still creep me out. Because they’re slow and creaking and the car is older than the house my grandma was born in.

Regardless, I will ride it again. And then also again. And again another time.

When Angels Flight opened in 2017, The L.A. Times quoted a twenty-two-year-old man who expressed pride in seeing the funicular up and running again. “A lot ot people think Angelenos don’t care about our history,” he said, “but that’s not true.”

He’s so right. In fact, though the rest of the world may see L.A. as a reality star, she’s actually an ancient matriarch with a thousand stories to tell. Los Angeles preserves and records her history in millions of ways, all across the county, from the tiles that decorate our metro stations to the museums and marketplace of El Pueblo to the storytelling mural of the Great Wall of Los Angeles to the Walk of Western Stars in Santa Clarita. My favorite coffee shop even has one wall filled with old sepia-tone photographs of Hollywood and the Cahuenga Pass back when it was all dirt roads. Approach any Angeleno with a photograph of a major L.A. intersection 50, 100, 130 years ago, and they’ll need to hold it in their own hands, think about it, recall exactly what it looks like now so they can marvel at how much has changed. Wonder about the people who changed it. Wonder how they’re shaping this city now, without fully realizing it. 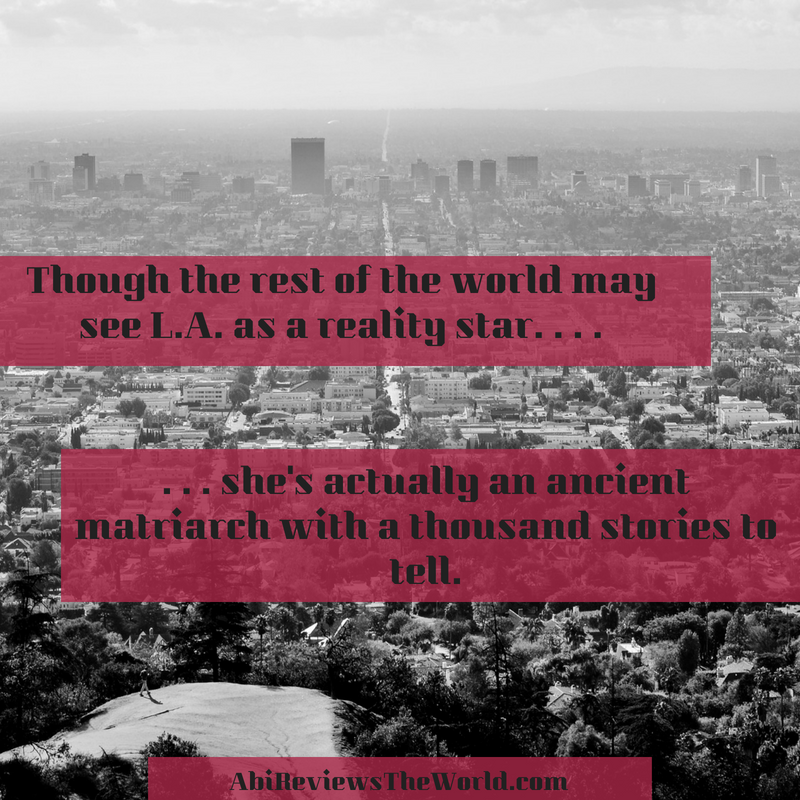 The histories of Los Angeles serve as a constant reminder that this is a world designed by its inhabitants. So many cultures and industries have left their fingerprints on L.A., and if there’s one story this great matriarch of city will not shut up about, it’s the story of Angelenos choosing the desire to rise over the fear of the fall. Innovators, immigrants, artists . . . steady hearts against the rickety tick-tick-tick of an uncertain ascent. When you realize that, your relationship with the city changes. It’s a living, evolving community, and you want to be part of what it is, what it will be.

Angels Flight is a gentler ride on the decent, or maybe it feels gentler because you close the gap between yourself and the street below with every passing second. On the ride down, Carol and I sat on the very, very last seats on the tram–two benches facing each other, out in the open air. We rode silently, looking at our city above us, below us, beyond us . . . a wide-reaching view that could still only contain a fraction of what L.A. actually holds.

One-way fare on Angels Flight is $1. Use your pre-loaded TAP card, and you only pay 50 cents. You can also buy a souvenir round-trip ticket for $2. And the mechanical issues that arose in several years ago have been fully investigated and corrected, so enjoy your flight.