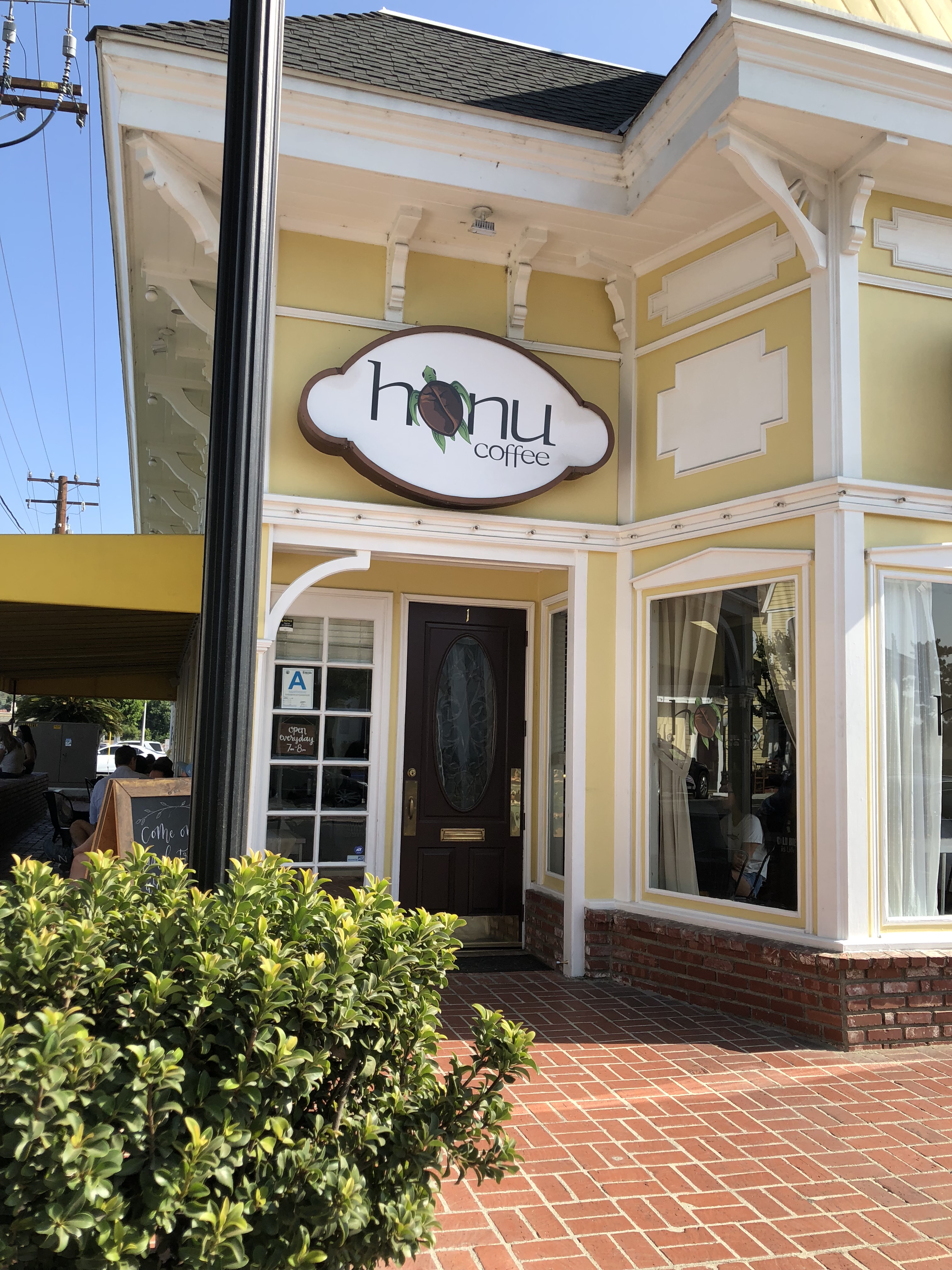 Wait. Let’s zoom out a moment for those who have no context for the phrase “Old Town Newhall.”

In the northern part of L.A. County, there’s a city called Santa Clarita. You may know this city from the Netflix show Santa Clarita Diet. As far as I can tell, the city is represented in that show with a fair amount of accuracy, aside from the zombie thing and an unfair joke about Newhall.

I am tremendously fond of Newhall, partly because I have family there and partly because of  Old Town Newhall, or “OTN,” as literally no one except the street banners calls it. Main Street is westerned-up a bit with sidewalks made of brick and wood, decorative wooden fences, and the Walk of Western Stars. If you head east on Main, you eventually run into a William S. Hart park, which features a barnyard of hogs and chickens and alpacas, as well as Hart’s old mansion on the hill and a roaming herd of bison who are descended from another herd of bison that were donated to Hart by Walt Disney in 1962.

On the west end of Main, you run into the gorgeous, two-story Newhall Library, whose parking lot carefully wraps around the historic Newhall jail, built in 1906. Look to the north, you see a soon-to-be-Laemmle under construction. Look to the south about a block, and you see a cluster of Victorian-looking storefronts that I have come to think of collectively as my personal Stars Hollow.

This is where you’ll find Honu Coffee.

Honu’s logo is a sea turtle whose shell is a coffee bean. This is not relevant, but I just now realized it today after countless visits to Honu, and now I feel like I’ve cracked some kind of code.

The Honu is the Hawaiian Green Sea Turtle, and it’s a symbol of good luck. You kind of get those vibes when you enter. It works. There’s a checkerboard floor, subtle surf and turtle art, high ceilings, and a couple tables set up beside the bay window of the storefront.

The psych-out of Honu is that seating initially seems limited, with just a few tables inside the door and a handful of two-tops along the sidewalk outside. Head to the back of the store, though, and you find a staircase leading up to the loft, and the loft is where the magic happens.

A long communal table. A couple comfy chairs. A couch and coffee table. Bar style seating that looks out over the floor of Honu and comes with easy access to outlets. A little table in the corner piled with a modest collection of board games. Honu Coffee reminds me what coffee shops were to me when I was younger, and what they have been throughout history, really. They are places to gather, to study, to think, to switch up the view while you do things you could do just as easily in your own kitchen.

The little town I grew up in got its first coffee shop when I was in high school. I felt so grown up, so destined-for-things just sitting at a table with my hands folded around a glass mug, my girlfriends and I discussing our college applications, quizzing each other for finals, watching local artists perform on open mic night like we were sophisticated New Yorkers or something.

In college, it was Due Gatti—a new coffee house in a 19th century building in the tiny town square of Jacksonville, Illinois. Before each visit, I would calculate how much decadence I could afford. Small coffee? A latte? Biscotti? My girlfriends and I would occupy a carved wooden booth for hours, comparing notes on professors and hashing out personal drama. 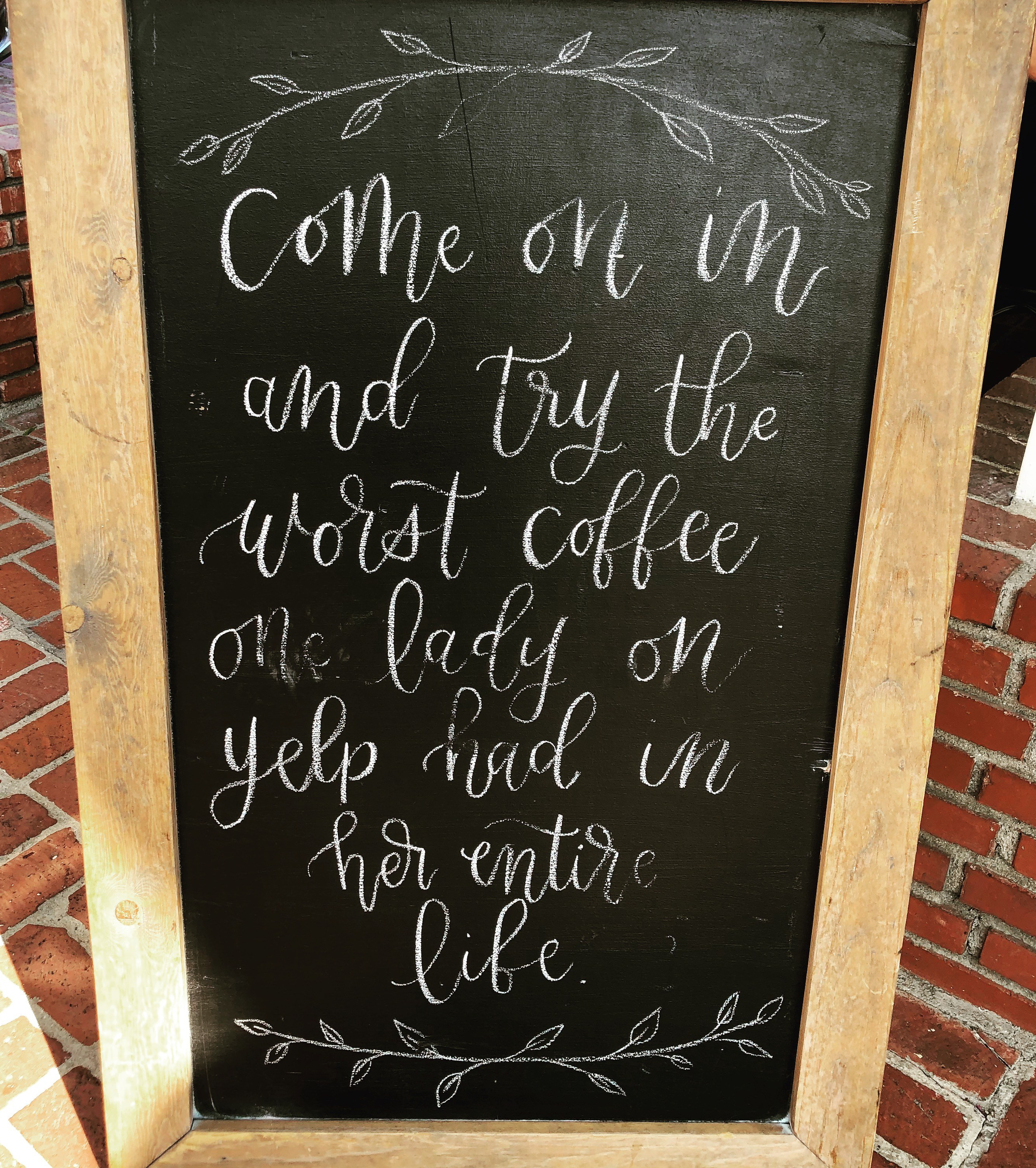 After college, it was The Electric Brew in Goshen, Indiana. During the week, I toured the with a small troupe of actors, performing in schools. On the weekends, we’d decompress—separately or together—at The Electric Brew, where they had those bowl-sized lattes. The tours were always rough. Four people spending 24 hours a day together, five days a week. We were all kinder to each other at the Brew. Sometimes I brought my knitting. I’d learned how to knit at the yarn shop a few doors down.

Since then, coffee shops have become a place where one writes screenplays or one meets with a colleague for networking coffee. I have no beef with either of these things, but I’ve definitely forgotten how to think of a coffee shop as a communal space. I don’t know if that’s the nature of L.A., or if it’s who I’ve become as an adult. I go to The Coffee Roaster in Sherman Oaks a few times a week. (Highly recommended, more on that in a future post.) It’s often crowded with regulars who know each other, who sit at the bar discussing politics and movies and Madeline Kahn. I don’t attempt to formally join them, because I only know how to bring my social life into the coffee house, not how to discover it there. But I walked in this morning and a regular I recognized but couldn’t name said, “Oh, hey, Abi’s here! Abi, we have a Harry Potter question, and I know you’re a Harry Potter fan . . .”

It never occurs to me that near-strangers might take note of things like my name or my Ravenclaw cardigan. I think I underestimate my visibility in the world and I overestimate the obstacles that lie between being beside a community and being within one. I forget to wonder if the people around me might be open to connecting. It’s a rotten habit of mine.

When I tell people about Honu Coffee, I usually mention the available outlets and the stack of board games before I say anything about the coffee. I don’t even remember which games they are—if they’re any good. I just like what they imply. Stay a minute. Be here. Talk. Play. Study. Maybe get a refill.

There are a lot of cool coffee shops all over L.A. County, but I have a soft spot for the ones that seem to want to find that intersection of business and community. Honu is definitely one of them.

And for the record, the coffee is exceptional. The customer service is typically decent-to-sparkling. It’s open daily from 7 a.m. to 8 p.m. And it’s right next door to the comic book shop from Santa Clarita Diet. 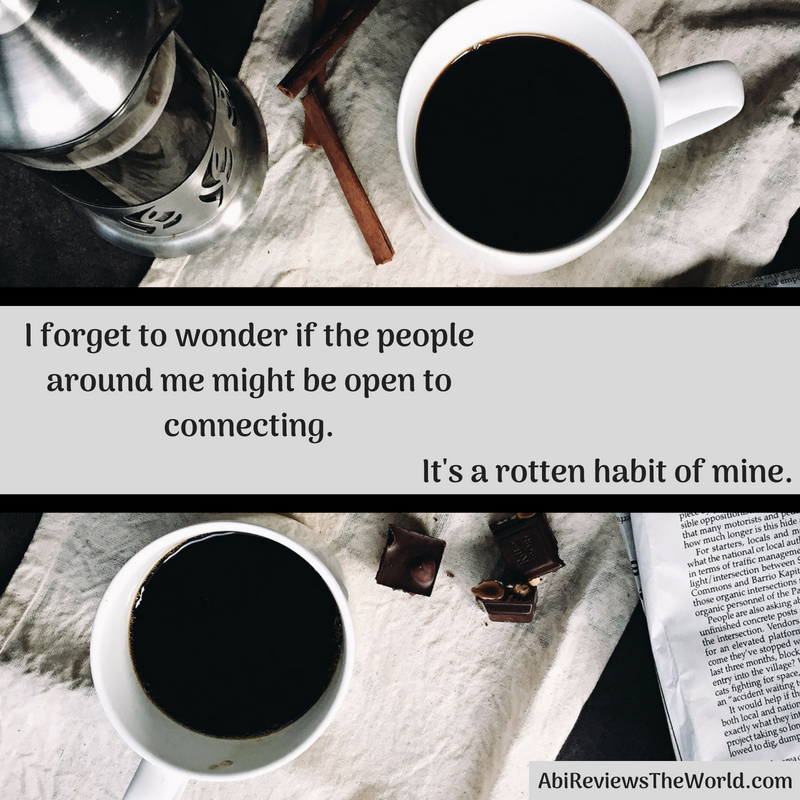