A Little Background on the New Book… 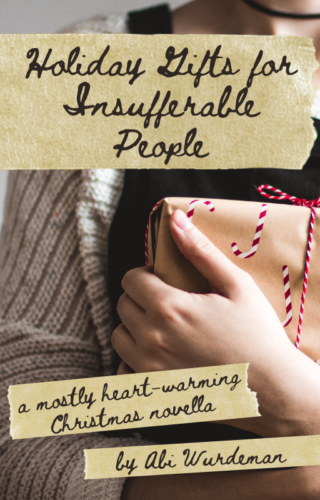 After an unexpected delay, my Christmas novella, Holiday Gifts for Insufferable People, is now available for pre-order on Amazon. For the time being, it’s only available in Kindle, but—fun fact!—you can read a Kindle ebook on any device using the free Kindle app.

I wrote Holiday Gifts for Insufferable People with one specific goal in mind:

I wanted to give people a Christmas story that would take the pressure off their own holiday experiences.

I learned this in 2019 when I spent my holiday season with my parents in an extended stay hotel room in Dallas, waiting to see if my dad would get the liver transplant he desperately needed. This was a far, far cry from the holidays we had known—the flocked tree sparkling beside my parents’ fireplace, my mother’s expansive Christmas village glowing on the dining room buffet. And no one was more heartsick for Christmas than my dad. He loved the decorations, the presence of family, waking up early and blasting Manheim Steamroller. Unsurprisingly, that all appealed to him far more than lying in hospital and hotel beds, contemplating his mortality.

Now, if you were to ask someone who knows the rest of this story whether 2019 was a magical holiday for my family, they would probably tell you of course it was. Because at 2:00 a.m. on December 11, 2019, a woman called to offer my father a liver from a deceased donor. Only 24 hours later, my dad’s surgeon walked into the OR waiting room to report to my mother, brothers, and me that the liver was pristine, the surgery was a success, and my dad was doing great.

It was a season of rebirth, and on paper, there’s nothing more Christmas than that. But real life is more complicated. Of course, we were overcome with relief, appreciation, and waves of giddy joy. But a new liver does not mean immediate healing. In addition to the months of pain and rehabilitation that lay ahead, there was the fact of what we had just been through. When a man knows what it is to believe his life on Earth is ending before he is ready, when a wife and a daughter know what it is to be powerless to save the man they love from his inevitable human vulnerabilities . . . well, you need a second to process all of that. Fixing the situation doesn’t erase the things you now know.

Last Christmas, I was deeply grateful that my father was going to live and I felt almost zero Christmas spirit. Both feelings existed at the same time, because even miracles are complicated.

Strangely, the closest I came to feeling that holiday magic was in the small moments . . . the little gestures of love that sustained me on both sides of the transplant. Like my mother sneaking cozy socks into our grocery order because she didn’t have time to shop but couldn’t bear to give me nothing on Christmas morning. Riding the trolley through downtown Dallas with my boyfriend Peter on his whirlwind visit. And even sitting beside my dad in his bed, watching our favorite Christmas movies while surrounded by a barf bucket and pill cases and neglected bottles of Ensure and all the other indicators of a pretty rotten time. He did what he always did—told me how great this next scene was going to be as if I hadn’t also seen the movie eighteen hundred times, reciting his favorite quotes about seven lines too early. During the commercials, he’d get deep, talking about religion or his hopes for my life or how he wished he had gotten me braces when I was younger. We got into some territory that I had often shied away from, afraid that there would be awkwardness or confrontation. But there was none, because both of us knew the other was having a rough time of it, and we were going to take care of each other until we got to the other side. So when we disagreed, we both prioritized listening and understanding over responding and explaining.

This year has been a beast for a lot of people. So many have dealt with immeasurable loss, isolation, anxiety, uncertainty, and instability. I wrote my Christmas novella with the goal of communicating what I needed to hear around this time last year: that it’s okay if the comfort and joy are hard to come by. Just—if you can—let yourself see the little glimmers of love that will build to something brighter somewhere beyond the holidays.

I also wrote this story believing that I personally did not need it this year. With the holidays approaching, I found I had plenty of things in my life that felt pretty magical. I was enjoying work, I was more in love with Peter every day, and although I couldn’t see my parents for Christmas due to Covid, I was relieved to know that my father had finally turned a corner in his recovery. He still had miles to go, but he was getting stronger, had managed to stay out of the hospital for a good stretch, and he sounded happier than he’d been in a long time.

November 20th was a particularly magical evening. Peter looked over my next-to-last draft of Holiday Gifts for Insufferable People, then we watched Jingle Jangle while I prepped twice-baked potatoes for my virtual, pre-Thanksgiving Friendsgiving the next day. When my mom called, it was still November 20th for me, but it was November 21st for her, and that’s why I knew seeing her name on my screen could not possibly be a good thing. I disappeared into the kitchen to take the call, and that’s where Peter found me a minute later, gripping the edge of the sink and trying to contain sobs. I told him what I knew . . . that my dad had gone into cardiac arrest at home, and that the paramedics were there now trying to revive him. Peter held me and asked what I needed. I told him I needed to finish the movie and the potatoes. Because I wasn’t ready. I needed just one more hour to pretend that this weekend, this holiday, this year was still going to be what I had expected it to be.

My dad passed away at 4:03 a.m. on November 21st, 2020. I don’t think there’s any getting around the fact that, for me, this holiday will largely be about my father’s absence. But as I debated whether or not to bother with the final edits and release of this book at a time when my launch schedule is shot to hell and all I really want to do is eat M&Ms and cry, I came to the conclusion that this story is one way to remember how my father is still here. I will never forget that even in the worst of times, he wanted to laugh at Clark Griswold with me and worried over my teeth. Those movie nights in his hotel bedroom were complicated miracles in their own right . . . a time when everything was terrible except that we gave each other the love we had to offer. That’s not exactly Christmas Magic, but it’s all that matters every other day of the year.

If this holiday is a tough one for you, all I can say is I’m sitting in it with you, and I wish I could fix it. I wish I could make the snow fall at the perfect time or get a crowd to sing a Christmas song that would fill your tired, anxious soul with joy. But all I have to offer is a hopeful-but-honest story that says it’s okay if your holiday does not feel like a Mariah Carey video. And if the best you can do is accept whatever gentle love you’re offered, you’re doing great.

Wishing you a peaceful holiday,

6 thoughts on “A Little Background on the New Book…”