The Three Clubs in Hollywood 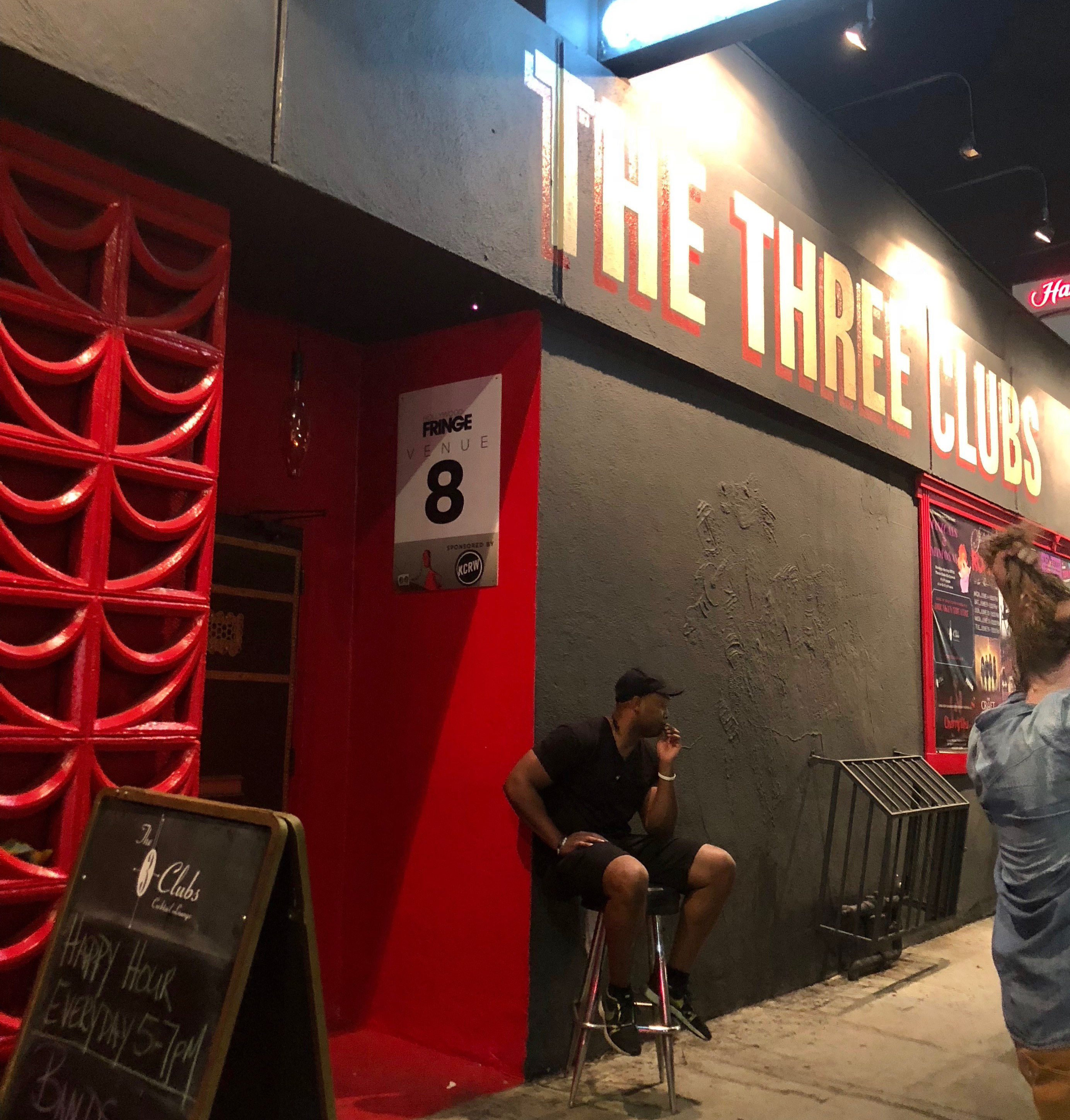 The Three Clubs is a bar located in Hollywood, though I couldn’t tell you exactly where, because I’ve only been once and my brother drove, so I definitely was not paying attention.

I went on a Wednesday night, which meant the main bar was exactly as I wish bars would always be: reasonable volume, plenty of comfortable seating, unrushed service. That said, I spent most of my time in the back bar–a dimly-lit land you enter by way of these grand, red double doors–a room with a small bar and a lot of little round tables and a stage. The night Phil and I were there, the back bar was crowded, which was actually what I’d hoped it would be, because my roommate’s band, Tremolo Lights, was performing their single release show.

There are two things I’ll say right off in celebration of the back bar. One is that there is a lot of seating, which I appreciate, because you don’t always get to sit when you watch indie bands perform, and I hate standing. I will sit or I will walk or I will dance, but standing is wrong. Cite all the articles you want, but it makes my knees hurt and my back feel heavy and if I die before you because I’d rather sit than stand, so be it.

The second thing I like about the back bar is that the bartender was nice and smiled and didn’t look offended that I requested a drink. That is where I have set the bar after a decade of customer service experiences in L.A. The drink itself was weak and overpriced, but in Hollywood, I’ll take the friendliness as a win.

The third thing I liked about the back bar–and I know I didn’t say there’d be a third thing, but here it is–is that Tremolo Lights played there.

There are few things in this world as lucky as actually liking your friend’s music. I feel grateful every time I go to one of Stacy’s shows, every time I hear the first couple measures of a song and think, “Oh my god, I love this one!”

And on top of just liking their sound, there is the natural inspiration that comes of watching the end results of someone’s work . . . of knowing that this room full of whistling people happened because of all the days I heard Stacy’s smooth voice running scales on the other side of her bedroom door, all the nights I saw her guitar case and equipment sitting by the front door, waiting to be carried out for rehearsal or a show.

I am always more effectively inspired by the people I know than I am by famous strangers. I took me a long time to realize this about myself.

When I first moved to L.A., I felt a pressure to be more starry-eyed than I was, to go full-on La La Land. I kept meeting people who had moved here specifically to “become a star,” and they could name the exact person they wanted to become. I’ve always had creative heroes–Amy Poehler, Tina Fey, Jhumpa Lahiri, David Sedaris–but I didn’t feel that electric pull to become anything. I wanted to follow in their footsteps, work ethic and brilliance-wise, but “wild success” felt like a shifting mirage–an abstraction that couldn’t clarify the direction I should take. I thought it would be nice to be a star. It would be nice to wear beautiful dresses on red carpets and to be someone that everyone assumed was brilliant because they’d heard my name before, but those were not images that sent a thrill down my spine.

I was twenty-three then, and worried that I wasn’t ambitious enough to design a meaningful career. I thought I had to ache for grand things. I wondered what it said about me that I didn’t.

A decade later, I’d sit next to my brother at a little round table in the back bar of The Three Clubs, watching my roommate bend into her guitar like a rockstar in a jewel-toned, vintage dress. I’d think of all the recording sessions and rehearsals and photo shoots and social media campaigns and the songwriting and the outreach to book shows, and how all of that for her translated to people like me taking a break from real life on a Wednesday night to hear that song we love just one more time. I’d think of how exciting it would be to hear Stacy’s music in a movie, to see someone wearing Tremolo Lights merch, to watch her win a Grammy one day . . . but how, in the meantime, what inspires me as a writer is not so much Tina Fey’s face on a magazine, but more the sight of Stacy’s guitar ready to go by the front door. I don’t know what it feels like to make it to the top–probably pretty good–but it’s all theory and abstraction. I do know what it feels like to slip so deeply into writing that I forget about trying to become anything. I know what it feels like to edit and polish and obsess and step back to realize I’ve managed to improve somewhere within the mess of it all. I know what it feels like to hold a stack of my own thoughts in my hands–or, more often, they’re Phil’s and my thoughts–and know that we did the work of transforming our ideas into a concrete object that exists for everyone. I know from personal experience what those things mean, and my primary motivation is to keep that going and discover what it all builds into.

The morning after Stacy’s show at The Three Clubs, she was on an understandable high. The show had gone brilliantly, they’d gotten extremely positive feedback, and–as they always do–collected new fans.

Twenty-four hours later, I asked her if she knew how many people had downloaded the new single. “I don’t know,” she said. “I’m just excited to get going on the next thing.”

You can find Tremolo Lights’ new single, “Afterglow” on Spotify or here.

As for The Three Clubs, they have happy hour from 4-7 every day, and you can check out their calendar for near-daily entertainment, including music, caberet, and cool events that benefit organizations like Library for All and RAICES. Parking might be easy; I don’t know. We got confused and found free street parking less than a block away. 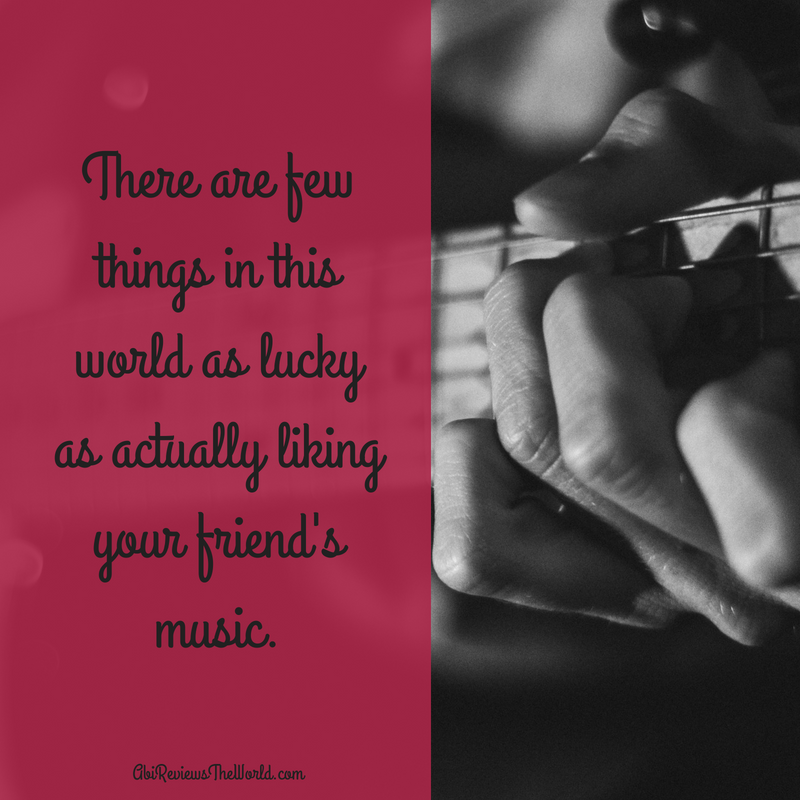