That Time I Dated Crazy

I accidentally stood Sam up the first time he asked me out, but only because I thought he was joking. For one thing, he was my coworker at the casino, and we were forbidden from dating one another. This rule—like all of Corporation’s rules—was born of company paranoia. A romantic relationship was likely to be a distraction, and distractions meant we were not guarding our chip trays with our full energy and attention.

Secondly, Sam chuckled while he asked me out. The entire time. He chuckled about having the date, he chuckled about where and when we’d meet up, he chuckled about how much he’d wanted to get this date. These days, I can usually recognize nervous chuckling when I hear it. Back then, I was under the impression he was just really into this “Wouldn’t it be weird if we dated?” joke.

You’d be confused, too.

So when Sam came to my table on his break to ask why I hadn’t shown at six o’clock that weekend, I explained that I didn’t think he was serious.

“I mean, because we’re not allowed to date.”

“What? Nobody follows that rule. Everybody dates.”

The dealer at my table nodded. “He’s right.”

And he was, though I didn’t know it, yet. Even the married supervisors dated their subordinates, so there wasn’t likely much trouble to get into here. Also, Sam was cute and kind of funny (in a confusing way).

Plus, I was just excited to date. I didn’t really date in high school. Then, in college, I liked the first guy I went out with so much I stuck with him for three years. And dating was impossible during my year with Bridgework, because I was never in one place for more than two days.

Now, I was finally ready to get into the dating scene, which—if television and movies were to be trusted—was bound to involve a lot of little black dresses, adorably ruined plans, and getting caught in the rain. Worst-case scenario: if the evening didn’t go well, I’d just laugh with my friends about it over mimosas the next day, and afterwards, I’d clumsily run into a cute, bespectacled architect at a newsstand on a city sidewalk. Or something. 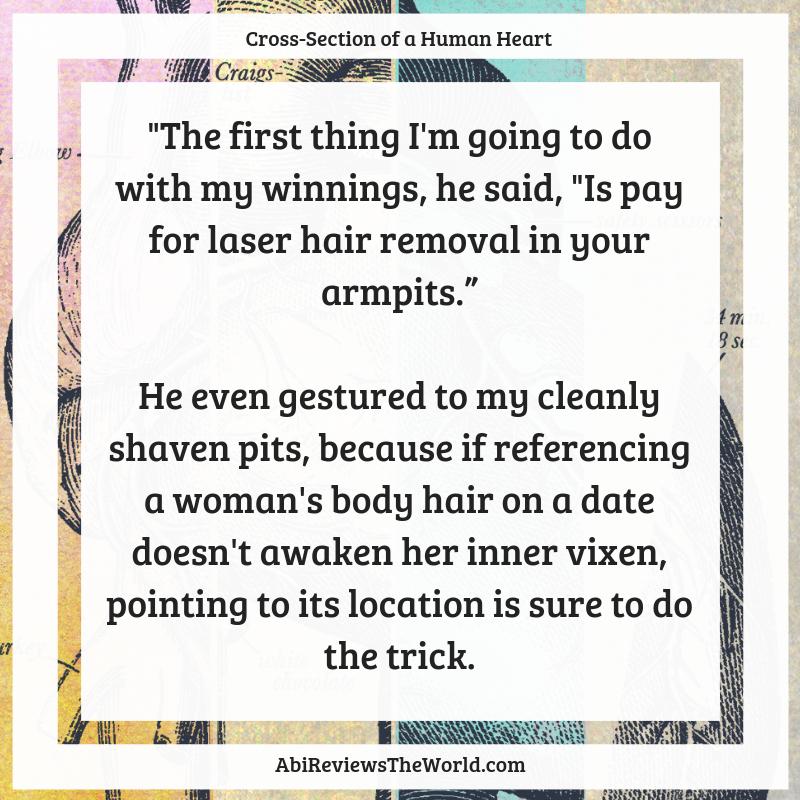 So I agreed to a date, and Sam insisted on picking me up directly from my house so I couldn’t ditch him this time. I scribbled my address on a piece of paper and handed it to him. He took it and looked it over like it was sacred scripture.

“This is a very important paper now,” he said. “I will keep it safe. Close to my heart.” I chuckled. That Sam. That crazy Sam and his confusing sense of humor.

He visited me again on his next break to tell me how stoked he was about our plans. He leaned on the rim of the table.

As a newbie in the dating scene, I wasn’t entirely sure what the proper protocol was when someone you barely knew referred to you as “The One.” I hesitated.

“You understand this is only a first date, right?” I said. “We’re only getting to know each other. Nobody here is anybody else’s ‘The One.’”

“It’s because I found the right one.”

“Do you even know my last name?”

“Do you remember it?”

He left to find the paper and returned reading my last name back to me, incorrectly.

These days, I would have canceled. Back then, I was curious. Also, I wasn’t sure how canceling a date worked. So I stuck with it, listening to Sam go on for the next few days about how he was so glad to finally find me and how on our date, he would at last reveal the reason we were meant to be together.

That weekend, he picked me up for lunch. I climbed into his truck—an enormous monstrosity I can’t even believe he was able to get into without a step-stool—and prepared to make first date small talk. As I began to ask about his hobbies, he interrupted to let me know he’d gotten me a ring.

He opened the console between us and pulled out a small, red, velvet box that—I swear to the blessed heavens—was shaped like a heart.

“You don’t have to take it now,” he said, “but it’s here whenever you want it. Just let me know.”

He put the ring back into the console and closed the lid. Not knowing how I was supposed to interpret this gesture, I stared in silence at the closed console for a moment, then said, “What about siblings? You have any siblings?”

We got lunch at Islands, where the get-to-know-you part of our conversation was stilted and awkward, due to his strong disinterest in actually knowing me. He kind of breezed over the pointless bits about where I’m from, what I love, and who I hope to become, rushing the conversation along to the Big Reveal he’d been hyping all week.

I set down my taco and folded my hands on the table, ready to hear him.

“I want to be with you because you remind me of my ex-girlfriend.”

“She’s Puerto Rican, but aside from the hair and the eyes and the skin, you look exactly like her.”

“Okay, you understand I’m not actually her, though, right? No matter how I look, I’m like a whole other person.”

“I want to be with you because you’re kind of pretty, but not so pretty that I’d have to worry about other guys hitting on you. I don’t want to have to get into a fight.”

I’ll let you sit with that for a moment, Dear Reader. Take your time. 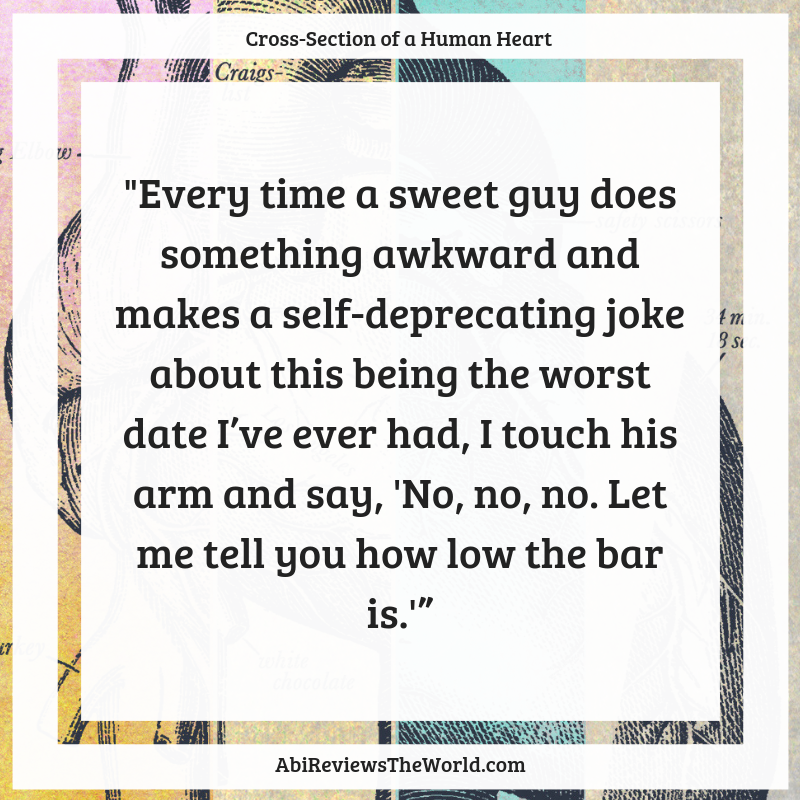 Now, the most common reaction to this has been complete and utter shock that he would insult my looks like that. That part didn’t bother me as much, largely because I’d already gotten similar—though more diplomatically phrased—reviews of my appearance. I was used to it. Also, I was actually getting hit on regularly by drunk, partially toothless, sixty-something-year-old gamblers at the casino, so I was actually doing pretty well for myself, no matter what Sam assumed.

No, my real issue was the “I don’t want to have to get into a fight” part. I didn’t want some possessive dink who had to fight for his honor every time some dude eyeballed his girlfriend. I wanted the guy who had the confidence and insight to be like, “I know, right? I’m really psyched that this woman, with her stunningly gorgeous face and even sexier brain, has exercised her right to choose her own partner by electing to be with me.” That’s the guy I want. I mean, I guess he doesn’t have to use those exact words, but that’s the sentiment I’m going for.

I tried to argue this point to Sam, but this point confused him, so he switched the conversation to the topic of our future together as a couple. (He was having trouble processing my disinterest.) He assured me that he’d be moving to San Diego as soon as he saved up enough cash. I’d be coming with him, and there was no need to worry about my career plans in Los Angeles, because he’d be making enough money as a boxer to support us both.

“The first thing I’m going to do with my winnings,” he said, “is pay for laser hair removal in your armpits.” He even gestured to my cleanly shaven pits, because if referencing a woman’s body hair on a date doesn’t awaken her inner vixen, pointing to its location is sure to do the trick.

He then asked if I was ready to go. It is important to note that when he asked me this, my mouth was open, with a fish taco moving toward it.

“I’ve only finished the one taco. I have two more left.”

“Okay, but I’m not. And we just got here twenty-five minutes ago.”

“Well, hurry up. I want to go back to your house and make out.”

Now, as a rookie dater, I had gone into this date worried about how I would handle it if I didn’t want to see him again. What would I say? How does one turn someone down gently without condescending? Turns out, it’s possible that a date can be so colossally awful, you kind of don’t care about any of that stuff by the end of it. You only want to make sure this never happens again.

As I said goodbye to Sam, I told him there’d be no repeat date.

“I know you’re scared,” he said. “Your heart is beating so fast.”

“I’m not afraid of that, Sam. I just don’t want to have another date with you. This isn’t a good match.”

“I know, it’s scary to find the one you love. You’re so afraid right now.”

“That’s not the situation.”

I was unable to convince him, but I did succeed in getting him off of my front porch, and as he drove away, I locked my front door and sat on my sofa, taking a moment to review the morning and recall if I might have accidentally ingested any hallucinogens. Because that could not possibly have been real.

But it was. Sam confirmed it at work as he continued to assure me that he would not hurt me. It took some doing, but I finally convinced him that our time together was not magical, my heart was beating at the appropriate rate, and there was no future for us—not here, and not in San Diego. He wasn’t really heartbroken. He just looked around the room for another woman he hadn’t professed his love to yet and brought his heart-shaped ring box to her.

This was my introduction to the world of dating. This. This guy. The upshot is that it could only get better from here. It also launched me into the world of romance with a pretty level-headed view of how it goes down.

There really aren’t a lot of little black dresses, as it turns out, because little black dresses are for expensive dates, and nobody needs to be dropping Benjamins only to find out they never want to see someone again. If I get caught in the rain, it’s while I’m driving home on the 405, and the traffic slows to ten miles-an-hour, moving me to reflect on whether I like this guy enough to drive the 405 in the rain again. Or in construction. Or, you know, ever, because it’s the 405.

I know people who love dating, but I am not one of them. I do love connecting with people—I just find that connection doesn’t come so easily over a cup of coffee and a conversation about who went to college where. In the years since Sam, I’ve laughed so many courtesy laughs and made so many jokes that went unnoticed (or repeated back to me under the assumption that I’d been funny by accident.) I’ve put my foot irretrievably into my mouth, and I’ve bristled at more than one sexist remark. I’ve been asked to write less and think about my hypothetical future with my date more.

But no one has ever topped Sam.

Every time a sweet guy does something awkward and makes a self-deprecating joke about this being the worst date I’ve ever had, I touch his arm and say, “No, no, no. Let me tell you how low the bar is.” 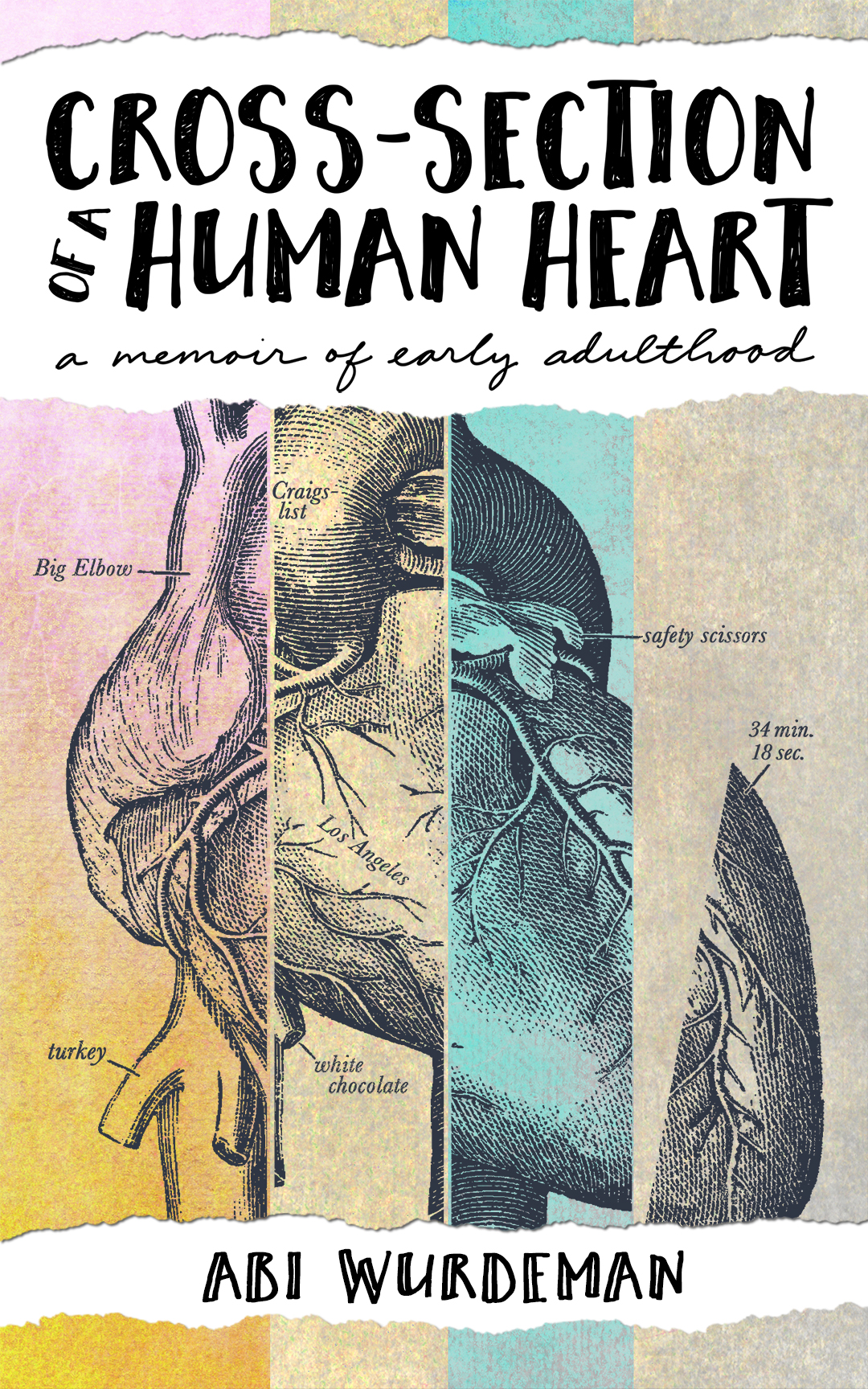 (This story is an excerpt from Cross-Section of a Human Heart, paperback available for purchase on December 26, 2018 and Kindle available for pre-order now.)

1 thought on “That Time I Dated Crazy”